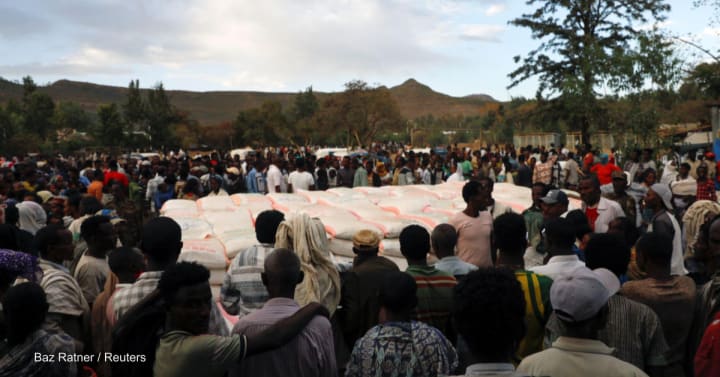 In Ethiopia’s Tigray, only 1% of people needing food aid received it

Between Oct. 7 and 13, only 1% of the 5.2 million people in need of food aid in Ethiopia’s war-battered Tigray region received it, according to the United Nations Office for the Coordination of Humanitarian Affairs. Over 400,000 people are experiencing famine-like conditions there.

Of the 52,000 who received food aid, half received only one or two items, the U.N. agency said in a report Thursday.

The portion of children under 5 years old experiencing severe acute malnutrition is at an “alarming” 2.5%.

Fuel is barred through this route, and the report found that shortages forced “several humanitarian partners” to stop or cut back programs, including food aid, water trucking, health services, sanitation activities, and support to survivors of gender-based violence.

Since mid-July, only 15% of the needed humanitarian trucks have entered the region.

New restrictions imposed by the Ethiopian government that require additional documentation for flying to Tigray have resulted in 10 to 15 international humanitarian workers on average being denied boarding per U.N. Humanitarian Air Service flight from Addis Ababa to regional capital Mekele. The government has also restricted how much cash organizations can carry into Tigray.

Escalating violence: The Ethiopian military launched new airstrikes in and around Mekele this week, the first ones since June. Three children were killed, with other people injured. On Friday, the U.N. suspended all flights to Mekele after government airstrikes forced an aid flight to abort a landing and return to Addis Ababa.

In a news briefing this week, U.S. State Department Spokesperson Ned Price called on the Ethiopian government and Tigray People’s Liberation Front to enter cease-fire negotiations, saying the fighting threatens the “integrity of the Ethiopian state.” The U.S. has threatened further sanctions in the absence of a deal. The conflict is set to enter its second year in November.

Update, Oct. 23, 2021: This article has been updated to include the United Nations’ suspension of flights to Mekele.