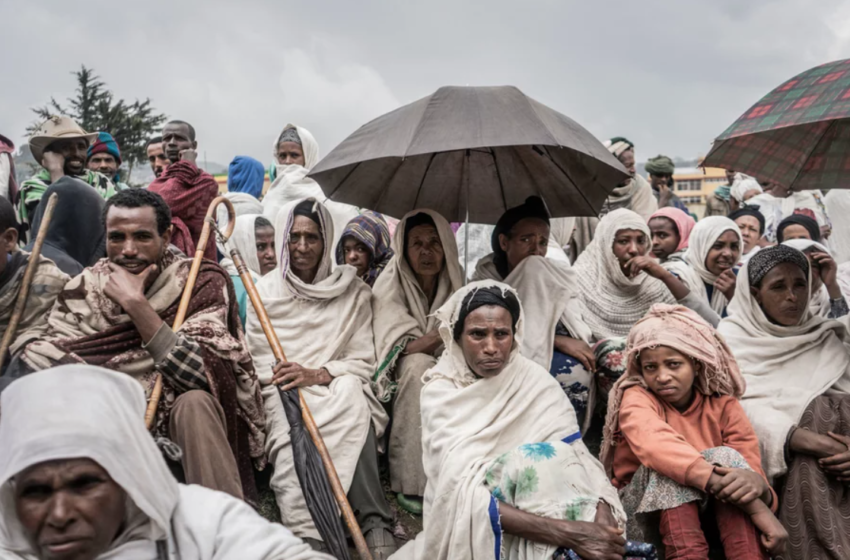 Ethiopia set a world record for displacements in a single year: 5.1 million in 2021

Conflict and violence triggered over 5.1 million displacements within Ethiopia in 2021 — triple the number reported there in 2020 and the highest figure recorded for any country in a given year, according to a new report from the Internal Displacement Monitoring Centre.

An internal “displacement” is defined as being forced to leave a place of residence but not crossing internationally recognized borders.

The cause of the staggering Ethiopian numbers: attacks against civilians, health facilities, and schools in Afar, Amhara, and Tigray which “triggered an unprecedented number of new and repeated displacements,” according to the report. So the number 5.1 million includes people who may have been displaced more than once.

The report also indicates there are around 4.2 million internally displaced people (IDP) in Ethiopia.

The ongoing civil war in Ethiopia began in November 2020 as a power struggle in the country’s northern Tigray Region. The government and its allies, Eritrea and the Amharas, are fighting Tigray’s dominant political party, the Tigray People’s Liberation Front. All sides have committed atrocities in the conflict, which has involved mass killings and the use of sexual violence as a weapon of war.

A deep humanitarian crisis has resulted, and the U.N. has said the government has put in place a “de facto humanitarian blockade” preventing life-saving medicine and food from reaching rebel-held Tigray. Officials in Ethiopia have repeatedly denied blocking access to aid, but over the past eight months only a small amount of the needed-aid has made it into Tigray. Currently, 5.2 million people in Tigray need food aid. Approximately 400,000 are experiencing famine conditions.

Although the government declared a truce in March, a small fraction of much-needed aid — less than 10% by some estimates — has reached Tigray and the U.N. is still reporting that access constraints are delaying food distributions.

“It is not for a lack of resources or goodwill on the part of the international community. It is due to the Ethiopian government’s deliberate policy of starving TPLF and the people of Tigray,” says Awet Weldemichael, a professor at Queen’s University. “We have an entire region completely disconnected from the rest of the world — no basic services, financial, telecommunication, education, and otherwise.”

According to Weldemichael, “all the elements of the crisis are worsening.” He says the ongoing conflict along with a drought the likes of which hasn’t been seen in 40 years and worsening socio-economic challenges, may lead even more conflict as people fight over limited natural resources.

To learn more about how the conflict has displaced people in Ethiopia, we spoke with Ivana Hajzmanova, the regional coordinator for the Middle East and Africa for the Internal Displacement Monitoring Centre. Her comments have been edited for length and clarity.

The war in northern Ethiopia has displaced millions of people at an unprecedented rapid scale. According to your data, 5.1 million displacements in a single year is a global record. Who’s most vulnerable and what are they facing?

This figure is very alarming and it shows how difficult the current situation is. Children are very much at risk. It was estimated that 1.7 million children lost access to education because they were in displacement. There were also widespread reports of human rights violations and abuses against different women, children and also members of different ethnic groups.

We are looking into the impact of displacement on disabled populations and disabled IDPs. We have observed that many settlements, evacuation centers, or IDP camps are not prepared to welcome disabled IDPs.

This war has unfolded during a global pandemic. What does your research show about the impact of COVID-19 on those who are displaced?

More than a half of those surveyed in displacement sites in Ethiopia report that they lost a job as a result of the pandemic, or they found it harder to find work because of the pandemic. In the same assessment, more than half of the IDPs said that they faced financial problems as a result of the pandemic, and they had to resort to reducing meals, borrowing money and also selling livestock — which is the main source of livelihood for many of them. The impacts of global inflation [due to the pandemic] is also impacting the ability of IDPs to buy food, which further impacts their food security.

Humanitarian organizations have called out the Ethiopian government for preventing them from accessing areas in Tigray. That makes it difficult to deliver aid — and even to assess the conditions that displaced people are facing.

There are certain parts of Ethiopia that are still inaccessible, especially in the region of Tigray. There are still areas which cannot be accessed by humanitarians and therefore they cannot be assessed. It’s very challenging, but despite this, our partners still manage to gather a lot of information on what’s happening in the country.

There are different ways of overcoming these challenges and it depends on the context and all the technological possibilities. It’s possible to use satellite images. This isn’t just a challenge in Ethiopia; we have seen similar constraints in other countries.

How do you use satellite imagery to gather data on displacement?

Through satellite images, we get a better idea of what is happening and what is the scale of displacement. Satellite images mostly show the destruction of residential areas. Based on that, we can estimate how many people lost their homes and [people who] were displaced.

Can you explain how you come up with the estimates in Ethiopia and other countries included in the report?

For example, when you look at countries where we have multi-story buildings, we need to take into account how many stories this building might have and how many people could have lived there. We need to understand the average household size to have accurate estimations of displacement. We also need to understand what might be shopping centers or other types of public buildings in order not to overestimate displacement.

So do we know how much it costs to take care of the living needs of one displaced person in Ethiopia? The report shows a yearly range for health care, housing, education and other costs from $90 in Colombia to $710 in Syria.

The average economic impact per IDP in Ethiopiais about $390 — higher than the global average ($360) largely due to the severity of needs in Ethiopia, logistical challenges and access constraints.

This represents the cost of providing each IDP with support for their housing, education, health, and security for one year of displacement and accounting for their [immediate] loss of income. This does not represent the money actually spent on IDPs in 2021. It is an estimate of what funds would have been needed to meet their basic needs.

In March this year, the government of Ethiopia declared a unilateral truce in its conflict with Tigrayan forces. What impact has this had on displacement? Is there an indication of what we may see in the coming months?

I would say [we have seen] a slightly positive development, which was a truce between the warring parties in northern Ethiopia. At the same time, we also saw more displacement in [the state of] Oromia, the region of [the capital city of] Addis Ababa. There were also reports of violence and displacement in the past few weeks.

Toward the end of 2021 and the beginning of 2022, because the fighting in Ethiopia decreased, we saw a wave of returns. There were hundreds of thousands of IDPs who were returning to Tigray, Amhara and Afar. The main challenges they were facing were large destruction of their homes, public infrastructure, a lack of services and lack of access to education. There are many challenges, but we saw that many people tried to return as soon as they had the possibility to do so. This gives us an indication of what we can expect in the coming months should the truce hold and the fighting decrease in northern Ethiopia.

The report also touches on positive migration trends we saw in 2021. For example, India and Pakistan announced a ceasefire in the disputed region of Kashmir, and Bangladesh is implementing a national strategy to help resettle people displaced due to climate change. What’s the outlook in 2022?

The trends are very worrying globally. We were saying in this report that 5.1 million new displacements in Ethiopia is the highest figure ever recorded for any country in a given year. Now we know that Ukraine is now higher and it [continues to rise].

Despite the fact that these numbers are so high and the trends are very worrying, there are some good practices across the world, where governments are trying to respond to the displacement crises. They’re adopting different policies regarding durable solutions for displaced people. Even though the situation is concerning, there are still some lights in the darkness.