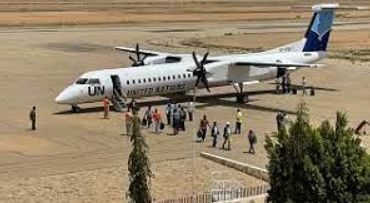 Ethiopia ex-peacekeepers from Tigray arrive in Sudan for asylum

Some 40 former peacekeepers hailing from Ethiopia’s war-wracked Tigray region arrived Sunday in eastern Sudan after seeking asylum, according to an AFP correspondent.

Last month, more than 500 UN peacekeepers who were deployed in the disputed Abyei region between Sudan and South Sudan asked Khartoum for asylum, citing fears for their safety if they were to return home.

On Sunday, an official with Sudan’s refugee commission confirmed that hundreds of Ethiopian peacekeepers requested asylum after the end of their mission in Abyei.

“Arrivals of the asylum seekers will continue daily until they are all moved,” said the official, who spoke on condition of anonymity.

An AFP correspondent said the ex-peacekeepers who arrived on Sunday were taken to the Um Gargour refugee camp in eastern Sudan.

The Abyei region has been contested since South Sudan gained independence from Sudan in 2011.

The United Nations established a peacekeeping mission that year and has since deployed some 4,000 mainly Ethiopian peacekeepers to the region.

But Tigrayan peacekeepers interviewed by AFP all said they were worried about their safety, with one senior officer saying that other returnees had been arrested or killed in Ethiopia.

The war in northern Ethiopia broke out in November 2020, when Prime Minister Abiy Ahmed sent troops into Tigray in response to what he said were rebel attacks on army camps.

Last year, around 120 Tigrayan ex-peacekeepers who were posted in the Darfur region sought asylum in Sudan, according to the UN.

Sudan has received tens of thousands of Ethiopian refugees since the outbreak of the Tigray conflict.