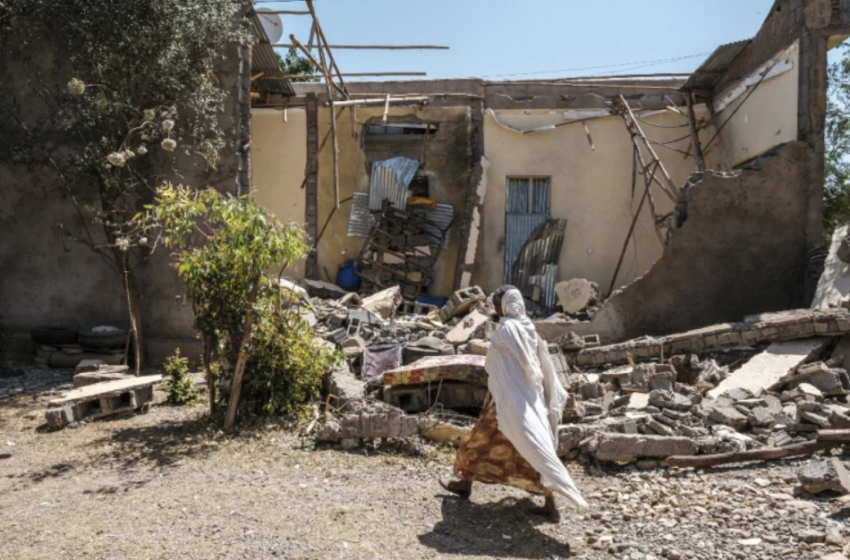 Tigray Annihilation and the Rare Opportunity with it

It has been stated by   the former  Sec of General of the UN in his interview with Tigray media house few months ago that what has been going on in Tigray according to his observation is not genocide, but a complete annihilation of Tigray  from the planet. We all know what is going in Tigray, the genocide is actively   implemented by its actors in the form of Starvation Genocide. They have just changed their tactic after they were beaten and went back with their tails between their legs. Both the messengers and the sponsors of Tigray Genocide has changed their tactic of Tigray annihilation.

This time using siege and starvation to annihilate Tigray and also using fake mediation, fake sanction, fake peace truce as delaying tactic to starve Tigray to death so they can control the world at large by killing 11 million people which glutton ideology. We clearly see all the actors now who are actively implementing Tigray annihilation. But God is with Tigray. They can plot, scheme, conspire, do stealth operation by their drones thinking that no one can see them since they  talk  nice  to deceive the world, but the man above see everything. Nothing under the sun is hidden. Man can scheme all kind of evilness, but man does not control the planet or history. With God and with all the damage incurred, Tigray will prevail because truth prevails evil always. But Tigray must see the rare opportunity that has come with the tragedy.

Thereafter, Romans invaded Greek in 46-7 BCE Greek. Julius Caesar invaded Greek. Greek mathematician, Physicist, Astronomer, Engineer and inventor Archemedes tried to make the first laser  weapon using mirrors  so  that he can burn Roman ships while on sailing on the sea. But he did not succeed. Julius Caesar conquered Greek in 46 BCE. Roman did not have Calendar at that time. Julius  was taken by surprised that the Greeks count time and have Calendar. He then ordered Greek Astronomers to make for him a Calendar. It took about a year to make the copy, cut, modified Greek Calendar to make it Roman Calendar. Julius Caesar died at the end of the 46 BCE. But the Calendar was  inaugurated in his memory  in 45 BCE.

On top of that Aksum ruled the entire Africa and the entire red sea, middle east and until the coast of India. There are Tigreans descents along the coast of India who trace themselves to Aksum and they share almost every cultural values of Tigray including wearing Netela or sheet clothing. Tigray civilization has been brought to an end by the blockage of the red sea by the rise of Islam and Arab conquest. Ever since it has been dark age for Tigreans. The past 1300 years of Tigray can be called Tigray dark age like the European 1000 dark age. All these because Tigreans were dislodged by Arabs from their historical and ancestral red sea ownership.  Now the Arabs came  with drones to completely annihilate the remaining Tigray.

They have done a damage that is beyond comprehension. However, there is a rare opportunity that has come with this tragedy. This rare opportunity is the opportunity to reclaim, restore and rebuild the historical and ancestral Tigray with all its ancient land and sea mark and its ancient people.   Tigray  problems cannot be solved  by recycling Menelick and Mussolonic project.   Arabs blocked the redsea for Tigray  and   Menelick and Mussoloni divided Tigray into two. Half Tigray colonized by Mussoloni and half Tigray colonized by Menelick. Menelick further divided Tigray into four pieces.

Part of Tigray was put in Wollo, Gojam, Gonder and Menelick carved out the current Tigray plus afar. TPLF chipped more land of Tigray and gave to Wollo, Gonder, and created Afar. Even Tigreans could not spare their land from chipping it. Tigreans have been themselves involved in doling away their land in the name of ethnic Federalism.  So the current Tigray map is not Tigray  map. Such Tigray  never existed in the long of history of Tigray. Thus it is time to reclaim,  restore and rebuild the ancestral and historical  Tigray  kingdom.  Anything less  than this is not helpful for Tigray.

To  reclaim,  restore   and rebuild the oldest nation of Tigray, Tigreans must not waste time and lives in a quagmire endless war of   going in and out of Afar, Wollo, Gonder and West Tigray. Tigray wasting time and lives fighting in Wollo, Gonder, Afar and West Tigray is not strategically and critically important at this time. All eyes of Tigray must be on reclaiming, restoring the red sea to its historical and ancestral owner. This is the key. The rest is secondary. The red sea is not for camels drinking. The red sea is the security and economic gateway of Tigray.

Therefore Tigreans must muster all their resources to make history that solves Tigray problem durably and lastingly.     It must be emphasised that Ethiopia and Eritrea has violated not only Tigrean sovereignty and humanity, but committed Genocide and by doing that they have forfeited or lost their sovereignty.   Tigray  must reclaim,restore and rebuild its ancient country. Israel did it. We can do it. We are the Israel of Africa. We will rise from the ashes to the stars.

Tigray must declare Uniteral Humanitarian independence right now. It is the right time to do so. Unilateral Humanitarian independence is  an international law that nations whose human right is violated and their existence put under big question mark take as remedial step to save themselves from extermination because they have no other choice.   Bangladish did this and now it is a sovereign country.   The Tigray Government for God ’s sake and for the sake of the people of Tigray, must oblige itself to learn and to change instead of holding 11 million people on a death throe to annihilation by refusing to listen and to learn anything. There is no law on the planet that is divine. All laws are human and changeable. No law is immutable.

The Tigray Government must also decree national services from the age of 18 to 45, all Tigrean men must join TDF instead of coarsing individuals in  a primitive DERG style.

The Tigray Government must start banking services; telecom, electricity from within Tigray and it must not wait for a fly to give honey. Forget Ethiopia, and move forward. The more you rely or try to rely on Ethiopia, the more venerable you will become. Time to be free now.