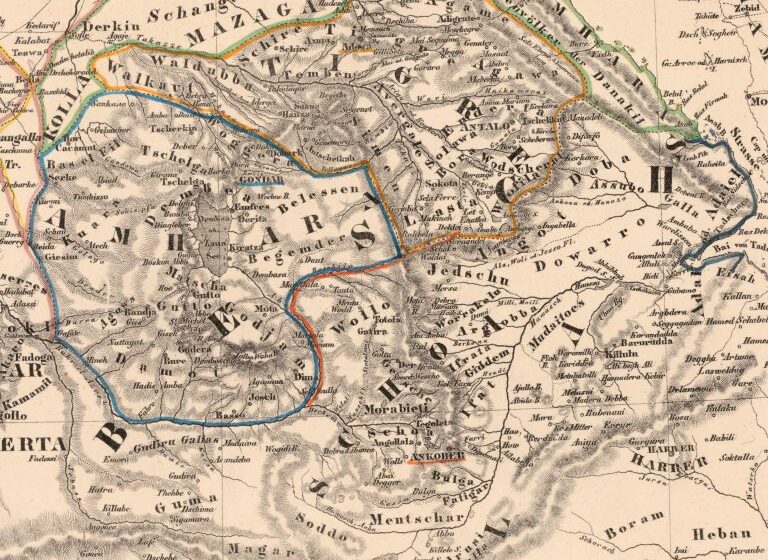 Western Tigray is significant not only due to the multiple war crimes committed there since November 2020, but also because the Amhara region claims it as historical Amhara land and has unconstitutionally annexed it.

According to the Ethiopian constitution, regional borders are based on ethno-linguistic settlement patterns, not historical administrative arrangements. Accordingly, western Tigray became part of Tigray as there was a predominance of native Tigrigna-speaking residents.

However, many Amhara nationalists have been using the supposed historical ownership of Amhara over these areas as a justification for the annexation. Although this “historical ownership” argument is irrelevant to the current federal arrangement, closer scrutiny of such claims coming from Amhara irredentists is needed.

After all, Amhara irredentism has been one of the drivers of the war on Tigray and taking away this fertile area from Tigray appears to have been part of the strategy to subjugate the region.

As evidence, one Ethiopian regime supporter proudly stated in July 2021: “Let them go! The defeated Great Tigray had to abandon the fertile regions it had stolen from the Amharas in the 1990s, and had to retreat to its arid heimat… Tigray has no more modern agriculture and industry, the infrastructure is destroyed.”

In a fascinating presentation on 13 April at the Berlin-based Scientific Working Group Horn of Africa, Professor Wolbert Smidt showed for the first time extracts of a map that contradicts the Gondarine narrative of the history of Western Tigray.

In a later detailed search, we uncovered several maps from the mid-19th Century in which Western Tigray is clearly mapped as part of the then confederate-like arrangement of Tigray.

The goal here isn’t to adjudicate the territorial claim based on specific maps, but rather to demonstrate that C.F. Weiland’s (1841) and F.H. Handtke’s (1849) maps fit in a wide array of historical maps and records which jointly reveal that territorial organization has varied tremendously over time.

In other words, the Amhara nationalist narrative of ancestral ownership over Western Tigray is out of touch with the historical record. Regardless, rather than being based on debates over historical ownership, territorial disputes should reflect current realities.

Given its greater detail, I have chosen to focus on Handtke’s map (1849), which was prepared by a German atlas-printing house in the mid-19th century.

Handtke’s map is 39 cm wide and 66 cm tall, and is printed on paper that has been bonded to fabric. The scale is approximately 1:5,600,000; relief is shown by short lines representing slope aspect and a general sense of steepness (hachures).

The map, based on early and mid-19th century diplomatic and other sources, has been produced by lithographic printing, with manual outline coloring, as was done for many maps prepared at that time.

The work was created in one of the few stronger cartographic publishing houses in 19th century Germany, managed by Carl Flemming (1806-1878). Flemming was aided by cartographer Friedrich Handtke (1815-1879), who worked on nearly every map assignment for the firm.

The map shows that the geography of the Red Sea Coast, Egypt, and “Nubia” was fairly well known, as well as that of the northern and central Ethiopian highlands. These were mapped in relative detail for “Tigre”, “Amhara”, and to the south with fuzzy boundaries for “Schoa”, as the mapmakers referred to these areas.

Due to inaccessibility, the physical geography of the otherwise well mapped northern highlands holds one major mistake: the Areqwa River, which flows directly to the Tekeze River, was erroneously mapped as running parallel to Tekeze and intercepting other affluents or tributaries such as the Giba and Weri’i Rivers (Fig. 1).

Further south, “Enarea”, “Dschimma”, and “Kaffa” are positioned with few details. A generic name “Habesch” is written diagonally across the highlands.

Maps of Northeastern Africa from the 19th century provide a lot of information about toponyms—which include place names, regional names, and the territorial extent of groups—as well as local ideas of boundaries and routes, overlapping political claims, and ethnic conflicts and interactions.

In other words, they weren’t only the work of visiting cartographers and scholars; they were the outcome of interaction with seasoned local partners who were experts in territorial knowledge and socio-political practices.

On Handtke’s map, Ras Ali’s “Amhara” corresponded largely to the current Amhara region, yet with Wollo as a separate entity. The territorial organization of “Tigre” included the Eritrean highlands (“Baharnagasch”) and the current Tigray region, comprising “Walkayt” and “Waldubba” in the west (Fig. 1).

This must not be seen as a unified “country”. Rather, the “Tigre” territory denoted a confederate-style structure of largely independent provinces and princedoms within an alliance that were pacified by Dejazmatch Wubie. The intermediate rivers that were impassable during the rainy season contributed to the sovereignty of the provinces within the larger structure.

By 1849, well before the scramble for Africa, Eritrea had not yet come into existence as a separate territory and so does not appear on Handtke’s (1849) map. On that map, the lowlands at the west of “Habesh” were also poorly defined, with the occurrence of names like “Schangalla”, “Kolla Mazaga”, or “Dar El Berta”.

Before Weiland and Handtke, Rigobert Bonne had already mapped less precise outlines of a confederate “Tigré”.

These maps are some of several historical maps that were omitted in Achamyeleh Tamiru’s review that was written to justify Amhara nationalists’ claims on Welkait. The references to “Wälqayt in Tegré” by Richard Pankhurst (1990) were also omitted.

These maps demonstrate how the argument that Welkait always belonged to provinces like Begemdir comprising Amharic-speakers that now make up the Amhara region is not based on evidence, apart from a territorial reorganization in the early and mid-twentieth century.

Indeed, the Abyssinian emperors Menelik II and Haile Selassie I divided the country into provinces, replacing territories that were formerly governed semi-autonomously.

As colonial powers did elsewhere, Haile Selassie cut into these existing territories and used this territorial reorganization as a way to reward his allies. The resulting provinces were constructed along with the strength of local powers, regardless of ethnic composition.

In contrast, contemporary Tigray’s legitimacy stems from the current federal structure that was brought about by the 1995 constitution. When the boundaries of the Tigray regional state were established as part of a federal Ethiopia, local self-determination and ethno-linguistic settlement patterns were prioritized over historical maps.

Remarkably, all language maps of the Ethiopian state sustain the current boundaries of the Tigray region. Such is the case for the map of languages of Ethiopia established by J. Spencer Trimingham, and republished by Egbert Westphal in 1975 (Fig. 2).

Trimingham and Westphal’s maps use the boundaries of the provinces as they were in the 1960s and early 1970s. The northernmost province, Eritrea, has since become an independent state. The post-1994 Tigray region encompasses the Tigrinya-speaking areas of Ethiopia.

As historical maps are a subject of research by the Ethiomap research project, with Smidt working on maps of the Ethiopian highlands and northern territories, more findings on the context of the 19th-century maps are expected.

To summarize, historical cartography demonstrates that claims of long-standing Amhara dominance over Welkait are spurious. If historical ownership arguments are to take place, they should consider the full range of evidence. Also, the settlement of territorial conflicts should especially reflect the ethno-linguistic situation both prior to 1991 and 2020.