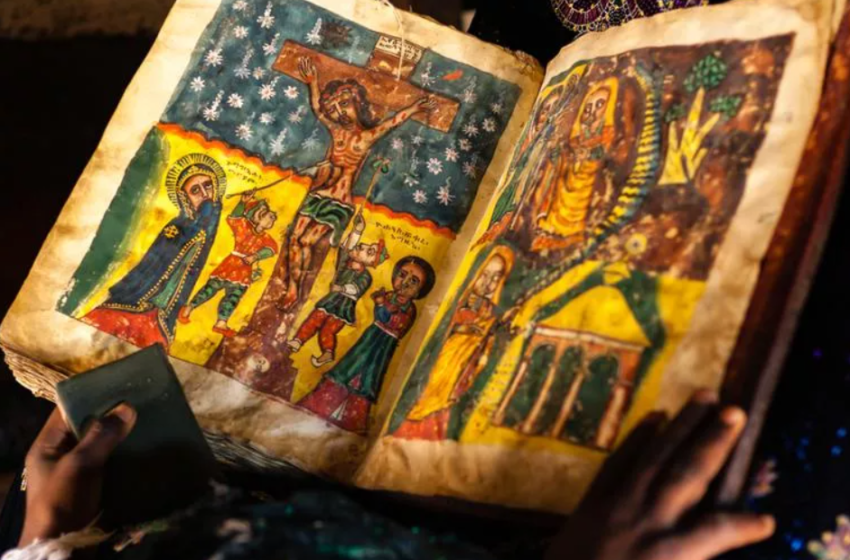 Ethiopia is Committing Genocide Against the Tigrayan People, Say Priests From Region

Priests from Tigray recount hellish scenes from their native land.

“Tigray is really in hell,” said a Catholic priest from the war-ravaged northern region of Ethiopia. “Never before has a government denied medicine to millions of its own people, closed their infrastructure, cut off their banking system and completely deprived all means of survival.”

The priest, one of three from Tigray who spoke to the Register on April 29 strictly on condition of anonymity due to fears of reprisals against them and their flocks by the Ethiopian government, conveyed in detail the stark reality facing the Tigrayan people.

Since last June, the priest said Tigrayans have been effectively severed from the outside world, driven to starvation and death, and continue face “countless” atrocities. “I know of a lot of people killed unjustly and brutally — innocent people, children, mothers with babies,” the priest said. “I consider them war crimes.”

The priest’s testimony echoes those of other Church leaders in the region.

In an April 6 appeal to the international community, Bishop Tesfasellassie Medhin of the Catholic Eparchy of Adigrat, eastern Tigray, said the “devastating crisis” is inflicting “every sort of evil on the Tigrayan population on a scale beyond imagination.”

More than 1.7 million children across Tigray have been “deprived of education in these two years!” he added, and described a particularly disturbing incident on March 3 involving 11 people, nine of whom were Tigrayans, who were burned on a pyre, at least one of them still alive.

The hardly publicized Tigrayan conflict, which erupted in November 2020, has so far led to tens of thousands of casualties from fighting or deprivation, and forced 2.5 million Tigrayans to flee to neighboring Sudan or to become internally displaced, according to the United Nations.

The U.N. has said atrocities during the war — fought principally between local Tigray Defense Forces (TDF) and the Ethiopian National Defense Force (ENDF) helped by Eritrean and other forces — have been committed on all sides, but with the majority of the crimes committed by Ethiopian and Eritrean forces.

In an April 4 joint report entitled “We Will Erase You From This Land,” Amnesty International and Human Rights Watch highlighted what they described as “widespread and systematic attacks” on Tigray that “amount to crimes against humanity, as well as war crimes.” The violence, they said, was “relentless ethnic cleansing” and something the Ethiopian authorities had “steadfastly denied” and “egregiously failed to address.”

Finland’s foreign minister and the EU’s envoy to Ethiopia, Pekka Haavisto, said last year that Ethiopian leaders had told him in February 2021 that they planned to “wipe out the Tigrayans.”

Pope Francis has issued several appeals for peace on behalf of the 7 million Tigrayan people affected, almost all of whom are Orthodox faithful. But a ban imposed last June on both journalists and aid workers entering the region has meant that little of what is happening there has filtered out to Western media and other institutions, including the Church (media and aid agencies had already been banned from the western part of the region after the war began).

“I feel Church authorities have no real picture of the terrible situation,” said one of the three priests contacted by the Register. The Ethiopian authorities, he said, are “going around checking the mobile phones of civilians so they don’t record any of the evil, and have cut all means of mass communications so the world doesn’t know.

“We know this,” he said, “because we have family there and they do all they can to send messages, even going across the border during the night.”

The Register contacted the apostolic nuncio to Ethiopia and Djibouti, Archbishop Antoine Camilleri, for comment on the situation but he had not responded by press time.

The conflict in Tigray has longstanding and complex causes, rooted in a mix of power-politics, ethnic rivalries and a region prized for its copper and gold deposits.

The Tigray People’s Liberation Front (TPFL) led Ethiopia’s coalition government from 1991 to 2019, a period of general stability but not without problems. After protests against corruption and human rights violations, its leadership was replaced by Prime Minister Abiy Ahmed, who liberalized politics and ended a territorial dispute with Eritrea, earning him the 2019 Nobel Peace Prize in the process.

But Tigray’s leaders looked with unease on Abiy’s reforms which they saw as an attempt to centralize power and destroy Ethiopia’s federal system, of which Tigray is a part. The TPFL refused to join Abiy’s newly-founded Prosperity Party.

Matters came to a head in September 2020 when Tigray defied the central government and held its own regional election, a move the Abiy government deemed illegal. Tensions increased a month later when the central Ethiopian government suspended funding for Tigray, which the latter viewed as a “declaration of war.”

Military confrontations began in November 2020 after the Abiy government accused Tigrayan forces of attacking Ethiopian army bases to steal weapons. An alliance between the Abiy government and Eritrea against Tigray also worsened relations: Animosity has long existed between Tigray, which borders Eritrea to the south, and the Eritrean government.

Over the course of the now-18-month war, observers say Tigray has been brought to ruin.

“It is hard to describe in words what is going on Tigray ‘out of sight’ of the world, as deliberate total communications blackout and blockade have made sure even the cries of agony and death are not heard outside Tigray,” said Gebrekirstos Gebremeskel, founder of Tghat, a news portal he set up to monitor events and counter the media blackout of Tigray.

He told the Register that since July 2021, “nothing gets into Tigray and nothing goes out — no trade, no banking, no fuel, no telephone, no internet. And everything has been deliberately destroyed.” A Tigrayan researcher based in the Netherlands, Gebremeskel said 80% of health facilities have been eliminated, “irrigation infrastructure destroyed, farm implements destroyed and factories destroyed. Now imagine life under these conditions.”

He warned that people are “perishing everyday due to engineered famine and lack of medication, and all of that out of sight.” The world, he said, “has forgotten Tigray or ignored it for geopolitical and business interests. It is such a sad story of people being wiped out in this age and after the world has supposedly learned to say, ‘Never Again’ to genocide.”

One of the most powerful testimonies from Ethiopia came recently from Bishop Mathias, the patriarch of the Ethiopian Orthodox Tewahedo Church, who in a March 19 video message cited Tigrayans burned alive and other alleged atrocities, including reports of boys being thrown off cliffs. Such crimes, he said, “make one despise being alive.”

“Nothing has been left in Tigray,” Patriarch Mathias said. “And now, in addition to all of this, children are crying in their mothers’ arms and perishing from starvation, like dried leaves.” He added that the war “was started to annihilate Tigrayans, to destroy Tigrayans, to eradicate them from the face of the world [and] has now spread across Ethiopia and is bringing instability, unrest, famine.”

Cardinal Berhaneyesus Souraphiel of Addis Ababa, who Pope Francis elevated to cardinal in 2015, has also warned of a “huge” humanitarian situation, and not just in Tigray but in the surrounding areas. But the cardinal, whom Catholics have criticized for being too close to the Abiy Government, said the situation is being worsened by a drought brought on by “climate change” rather than war. He also rejected calling the military operation in Tigray a conflict or war. The priests contacted in Ethiopia disagreed, telling the Register the cardinal is “trying to protect the image of the country.”

Although the war is primarily being fought along ethnic lines, Christians are being specifically targeted in the region. Monasteries, clergy and faithful in Tigray, whose Christian heritage dates back to the fourth century, have been attacked, sometimes by Muslim troops from Somalia and Eritrea assigned to kill priests, Gebremeskel said.

“Then there is the drone technology and financial help of Muslim countries such as the UAE, Iran and Turkey that also helped devastate Tigray,” he added. Ethiopian forces have also destroyed churches and looted their properties, and Gebremeskel cited a May 2021 religious councils’ report showing a total of 326 religious leaders had been killed in the first six months of the conflict — priests, deacons, religious and some Muslim leaders. A report on the religious dimensions of the Tigrayan conflict, released by Georgetown University’s Berkley Center, also cited a number of these events.

Last October, Gebremeskel tweeted that Tigrayan Sister Tiemtu Afewerki said three Eritrean soldiers had raped her after she traveled to Tigray from Jerusalem to pay her respects to her sister who had died. Sister Tiemtu said the enemy then shot dead her nieces and threw them, along with their mother, into the Tekeze river, according to Tghat.

A ceasefire was called on March 24 and the Ethiopian government said it would allow aid to reach stricken civilians, but evidence suggests little has changed.

Claire Nevill, head of communications and reports for the World Food Program in Addis Ababa, told the Register April 28 that 145 trucks “loaded with food, nutrition and non-food items and nine fuel tankers” arrived that week and that WFP had delivered enough food to reach “165,000 beneficiaries.”

But Nevill noted that that amounted to just 8% of the WFP’s target population of 2.1 million. According to U.N. estimates, at least 100 trucks of food and supplies are needed every day to cover the needs of 6-7 million people in the conflict region. An official quoted by the Holy See’s missionary news agency Fides said the humanitarian help could reach the affected areas if efforts were made, but the Ethiopian government is “using the aid as part of the political process.”

The government has denied this, Fides reported, and accused the TPLF of looting trucks and blocking the route, but the Tigrayan priests who spoke to the Register disagreed with that narrative.

“Tigrayan people are not beggars, but the government deliberately destroyed last year’s harvest so now they’re trying to portray us as the poorest region,” said one of the priests. “You can see the psychology they’re using, but what they say is not true.

“In normal times, Tigray doesn’t have to depend on anyone,” he added, asserting that Tigrayans are known for their industry and commitment, and that they contribute the most taxes because they are hard-working. He also claimed the Tigrayan militias are no longer a force as they have all been effectively halted.

The most senior of the priests told the Register he has been “really discouraged and really offended” by the lack of action by the international community.

“When the government becomes the enemy of its people and there is a danger of extermination of its people, for the international community to remain silent for months and months isn’t justifiable, moral or acceptable,” he said. “Other countries get a swift response which is good,” but he added that some countries are ignored. He said a “no-fly zone” should be imposed by the international community so medicines “can reach the people and allow lives to be saved — life is the priority.”

The priests said they appreciated the Pope’s appeals but wondered if he could go further and perhaps warn, without necessarily mentioning it explicitly, that “another Rwanda is happening” in Africa — a reference to the genocide that took place there in 1994.

In his April 6 statement, Bishop Medhin called on the international community to “take quick action” to save the Tigrayan people “before it reaches an irreversible level due to our collective, unfulfilled humanitarian duty and moral obligation.”