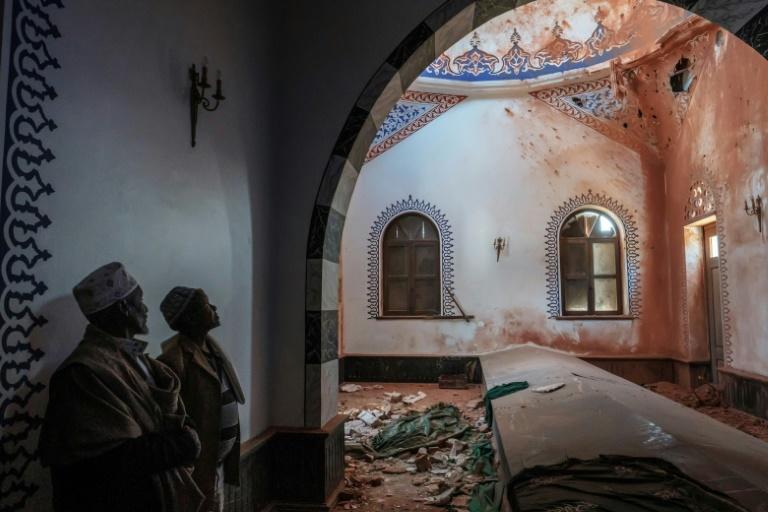 Heritage Society of Tigray Condemns the Cleansing of Tigray’s Heritage

The Ethiopian government’s military campaign against the people of Tigray was launched on 3 November 2020. Under the guise of “Law Enforcement,” the combined forces of the Ethiopian National Defense Force and its ruthless allies, including the Eritrean Defense Force, Amhara Militia, Amhara Special Forces, and Somalia Forces, inflicted unimaginable human suffering, bloodshed, and heritage devastation throughout Tigray. Two years prior to these attacks, an exhaustive campaign of media propaganda and bigotry was waged against the people of Tigray and their history. The scale of genocidal war, ethnic extermination, and heritage cleansing experienced by Tigray is unprecedented.

As a centre of early African civilization and a nexus for the introduction of monotheistic religions, literacy, and administration to the country, Tigray and its people have played a pivotal role in Ethiopian state-building. The Tigray region, sometimes referred to as “an open-air museum,” is a land of ancient cultural heritage, archaeological sites, and ancient trade routes. Its thousands of monasteries and churches (hundreds of which are hewn from solid bedrock), and mosques are custodians of priceless material culture of tangible and intangible value. Located as it is in the Red Sea corridor of the Horn of Africa, Tigray’s geopolitical context has made it susceptible to external invasion from ancient times to the early modern era. In so doing, many generations of Tigrayans have paid a high cost to protect Ethiopia and its priceless heritage.

However, our records show us that throughout its history, Tigray has never experienced as horrific events as those of the deadly war of the last 17 months. All crimes against humanity have been committed: genocidal rape, mass killing, mass arrests, ethnic cleansing, land grabbing, intimidation, and humiliation. These were perpetrated by the Ethiopian National Defense and allied forces. In addition, drones were supplied by the United Arab Emirates, Turkey, and China to help annihilate Tigray.

Tigray’s cultural heritage and values were explicitly targeted and vandalised along with the killing of innocent civilians. For instance, in early February 2021, the Tigray Orthodox Church Diocese announced that 326 members of the clergy, who are also heritage custodians, were brutally murdered. After that reports emerged that hundreds of religious sites (churches, monasteries, and mosques), multiple archaeological and ancient settlement sites, museums, and statues were intentionally and systematically damaged and pillaged.

Aksum Tsion, the greatest pride of the people of Tigray, was vandalized and more than 800 civilians were massacred by Eritrean soldiers on the eve of its anniversary festival in 2020. More than 26 gold and silver coins and a number of other artefacts were looted from the Aksum Archaeological Museum. Moreover, the renowned Aksumite stelae were placed in serious danger of collapse because of the unchecked movement of heavy Eritrean and Ethiopian military vehicles. Al-Negash Mosque, hallmark of the first introduction of Islam into Africa, was another victim of this cultural devastation when shelling damaged the apse.

The assault on the Monastery of Waldba, a key site for East African asceticism, is one of the most haunting of all attacks. Monks of great saintliness were persecuted and several hundreds were exiled because of their “Tigrayan ethnicity.” The damage and plunder of more than 3000 manuscripts and over 300 crosses of gold and silver are also part of the crime.

A large number of other Tigray monasteries and churches reportedly suffered extreme damage from heavy shelling. However, it is highly likely that there are still many unreported cases of pillaging perpetrated by Eritrean, Ethiopian, and Amhara militia who occupied regions of Tigray. Thousands of heritage objects (including magnificently illuminated Ge‘ez manuscripts) were damaged or pillaged and smuggled to different international antiquity markets. Memorial museums and statues, such as the palace museum dedicated to Yohannes IV (Mekelle), Tigray Martyrs Memorial Museum (Mekelle), and Keshi Gebru Memorial Statue (Humera) were also obliterated. In addition, intangible socio-cultural values were disgraced when nuns, teenagers, and the wives of priests were raped in front of their families; religious sanctuaries were defiled; and elders and religious leaders were humiliated.

The cleansing of Tigray’s heritage was premeditated and systematic. The Amhara central highland political elites are fixated on neo-Ethiopian attitudes strongly linked to distorted historical narratives. Tigray’s physical heritage and historic records challenge many of these damaging myths. As such, these campaigners and their military forces were highly focused and intentional in their demolition of Tigrayan heritage and cultural values, with the worst offenders being the Eritrean forces. The complex and long-lasting political dispute in northern Ethiopia, driven by conflicting cultural values and nationalist attitudes, reached a climax of dehumanization and violence when multilateral forces dismantled Tigray and violated the natural and human rights of its people.

Based on the general provisions of the “Policy Document for the Integration of a Sustainable Development Perspective into the Processes of the World Heritage Convention” (UNESCO, 2015) and a draft policy of the International Criminal Court (ICC, 2021), the safeguarding of cultural heritage is a fundamental human right. UNESCO Convention 1972 also affirms that governments have the responsibility, by law, to protect those elements of heritage found within their state boundaries (e.g., within Ethiopia). It is a dramatic irony indeed that the very Ethiopian government forces that should protect our heritage is spearheading its destruction. Furthermore, international responsible bodies such as UNESCO, ICOM, INTERPOL, and Blue Shield International have yet to address these crimes.

The Heritage Society of Tigray is outraged and deeply concerned about Tigrayan heritage and cultural values which are being threatened by an active campaign of destruction and ethnic/cultural cleansing. We fiercely condemn all the human rights abuses and heritage crimes committed in Tigray and we call on the international community and responsible bodies to plan an urgent intervention to protect, salvage, and restore Tigray’s cultural heritage.