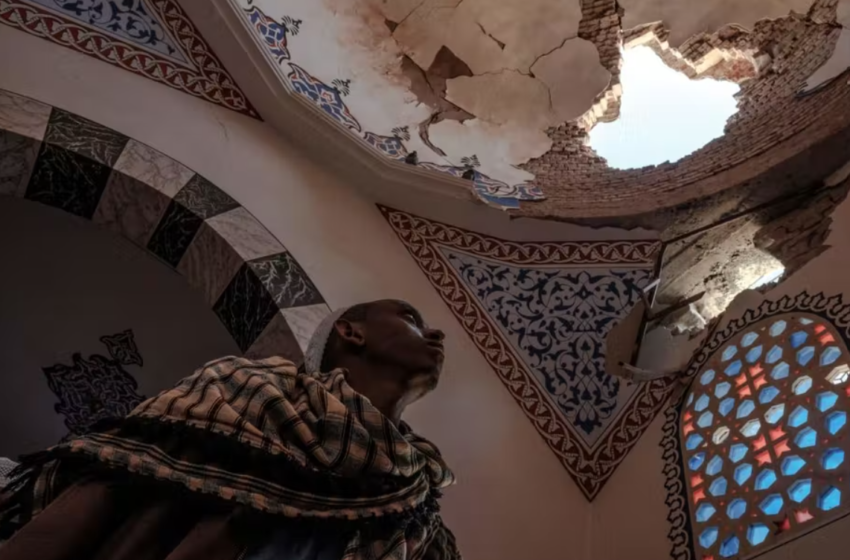 The human carnage and heritage destruction in Ethiopia’s Tigray region that began in November 2020 has been devastating. Thousands have been killed, millions displaced and several historical monuments damaged by invading forces in the East African country’s north.

Ethiopian Prime Minister Abiy Ahmed launched a military campaign against the Tigray People’s Liberation Front on 4 November 2020. As troops from the Ethiopian military and Eritrea, as well as Amhara militia groups, brutally attack civilians, they have also destroyed religious, historical and cultural sites of immense value. Some of the damage to these sites has been documented through calls made by Tigrayans using satellite phones.

The region’s heritage sites have been deliberately targeted. To appreciate the weight of these attacks, the role and influence of the church in Ethiopia needs to be understood.

The church underpins historical and modern claims of political and military authority in Ethiopia. It has shaped community identity and informed cultural narratives.

Therefore, the bombing and destruction of churches, as well as other religious sites, strikes at traditional power structures. These sites are cherished, multi-functional gathering places and sacred spaces. Looting and attacking them is a grave dishonouring of cultural values.

A report from the Tigray Orthodox Church Diocese three months into the war in February 2021 found 326 members of the priesthood had been killed. There is no clear data on how many members of the clergy have been killed since then. While at least 40 churches and monasteries have had a general assessment of damages, my analysis finds hundreds of such sites have been affected by the war.

I have received confidential local reports from those with satellite phones on the scale of devastation. This is a result of the network I have established over the past decade during visits to several historical sites in Tigray to carry out manuscript assessments and digitisation.

Ethiopia is the source of various civilisations in sub-Saharan Africa. It is believed to have more than 3,000 years of history. Most of the historical artefacts the country is famous for are originally from today’s Tigray.

For example, the Aksumite civilisation, one of the four known civilisations established in the first century CE (in addition to Rome, Persia and China), was in today’s central Tigray.

In the Bible, Qurʿan and inscriptions in South Arabia, terms like “Ethiopia” and “HBST” (Abyssinia) exist. Almost all the city-states and centres of civilisations prior to 13CE were found in today’s Tigray, Eritrea, and Agaw (a highland in today’s northern Ethiopia).

The Aksumite Monuments and Lalibela rock-hewn churches, both UNESCO-registered heritage sites, are among the treasures of East African civilisation.

The alpha-syllabic Aksumite writing system, Gǝʿǝz/Fidäl, is the only ancient writing system still functional in modern Africa. Gǝʿǝz script is still used in Ethiopia, illustrating that Africa is not only the cradle of people and culture, but also of literacy.

Tigray is the foundation for hundreds of thousands of manuscripts, and hundreds of inscriptions written in Gǝʿǝz. The world’s oldest existent Christian manuscript (from 6CE) – The Gospel of Gärima – is preserved in central Tigray.

Abrahamic religions were introduced in the early ages – Christianity before the 4th century and Islam in the first half of the 7th century – in Africa through Tigray.

Its early introduction to these monotheistic religions and its writing system saw Tigray preserve a huge amount of religious and cultural artefacts. This heritage documents the history of the Ethiopian state and its religious institutions.

Ethiopia is a country of rich anthropological value and complex political culture. It is also known for wars with foreign invaders, as well as civil conflict. In these clashes, countless cultural heritage items have been destroyed.

In the current war, many of Tigray’s heritage sites have been targeted by invading troops. The region has thousands of churches, monasteries, mosques and symbolic Islamic settlements, archaeological sites, museums and ritual centres. These spaces are popular with tourists from around the world and pilgrims from across the country.

Hundreds of these heritage sites have been destroyed in the ongoing war. For instance, the Church of Aksum Tsion is the head of Ethiopian churches and monasteries. It is symbolised as the dwelling place of the Ark of the Covenant. It was vandalised after hundreds of civilians were massacred around its yard by Eritrean soldiers in November 2020.

The al-Nejashi Mosque, a symbol for the first introduction of Islam in Africa, was bombed in December 2020.

Precious medieval manuscripts have been burned and vandalised. Thousands of artefacts have been looted and smuggled for an international market.

Heritage artefacts offer historical evidence and are a means of tourism development. But more than that, they are a social ingredient, upgrading human existence and giving it more meaning. People are emotionally connected to their heritage, beliefs, language and identity.

Religious objects and ecclesiastical materials are transcendent, emotive instruments between believers and their God/creator. They are also a display of genetic memory between descendants and their ancestors.

In this conflict, the people of Tigray have been denied their natural and human rights. they have had both their existence and meaningful life challenged.

The global community needs to step in to address the continuing loss of human lives and salvage Tigray’s cultural heritage. The destruction of the region’s tangible heritage and vandalising of its monuments of intangible value may lead to irreversible cultural shocks and social collapse.

While many international agencies have expressed their concern about the situation in Ethiopia, there hasn’t been practical action taken to save the lives of Tigrayans or their inheritance.

The African Union put up its headquarters in Addis Ababa in a nod to the Battle of Adwa (in Tigray), which was against colonialism. Yet, in a stroke of historical irony, the union has been slow to condemn the brutal killing of Tigrayans and the destruction of historical artefacts.