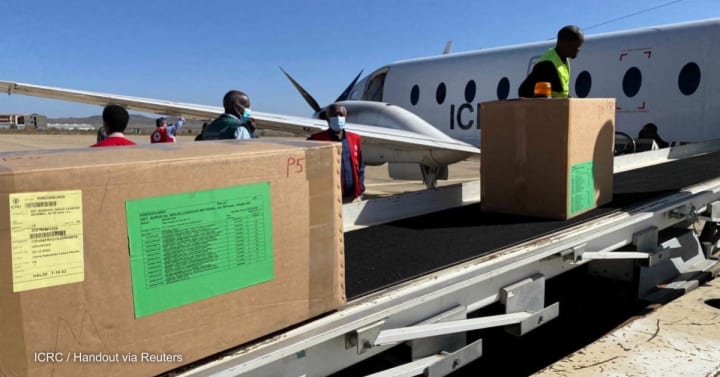 Opinion: In Tigray, we are demanding food and medicine, not bombs

Gross violations of human rights, the destruction and withholding of basic services such as telecommunication and banking, the blockade on all forms of humanitarian assistance, and the deliberate and systematic attack on health facilities have been significant features of the 15-monthslong conflict in Tigray. A far less reported on but no less gruesome aspect has been the continued and deliberate targeting of civilians using unmanned aerial systems.

A study by the Bureau of Health covering the period between June 2021 and February 2022 finds that the Ethiopian government has undertaken 62 airstrikes in urban and civilian settings across the state, each with one or more incidents.

Data indicates that there have been 1,136 civilian casualties with 384 deaths recorded so far and 752 injured. Over 46% of the victims were women, including pregnant and lactating mothers, with over 48% of the victims younger than 18 or older than 50. Victims range from an 8-month-old baby to an 87-year-old.

It’s important to remember that this data was collected despite a shortage in fuel and a comprehensive communication blackout in the region that makes it impossible to fully account for the damage and destruction caused in the region.

The airstrikes predominantly targeted civilian installations with 60 residential houses, seven marketplaces, four schools, three hospitals, two refugee camps, and a milling house being just some of the many targets.

Mekelle, Tigray’s capital, has been attacked 13 times. The worst of those targeted a residential area in a place called Kebele 06, claiming the lives of six people. Subsequent airstrikes have targeted cities, as well as farm lands on the outskirts of the capital.

The world has to take serious punitive action to ensure the complete lifting of the siege … and keep its promise to never again fail humanity.

A June 2021 attack on a market in Togoga, just 60 kilometers (37 miles) from Mekelle, has been the deadliest so far, claiming the lives of 64 civilians and injuring 180. Another deadly attack targeted a camp for people who are displaced in Dedebit, in northwestern Tigray, killing 59 civilians and injuring scores more.

The airstrikes took place at midnight on Ethiopian Christmas on Jan. 7, with drones attacking the camp for people who are displaced on three consecutive rounds. It’s important to remember that these persons were not displaced as a byproduct of war but were targets of an ethnic cleansing campaign in western Tigray, where Amhara regional forces and regional militia have been attempting to rid the area of its majority Tigrayan population.

The stick that broke the camel’s back

Worryingly, these victims of airstrikes are being hauled into a health system that has been devastated due to a deliberate and systematic attack on its infrastructure for more than a year now. A study by Mekelle University found that over 78% of health facilities in Tigray have been completely destroyed by allied Ethiopian and Eritrean forces.

A comprehensive siege on Tigray blocking all essential goods from coming into the region including food aid and medical supplies has further annihilated Tigray’s health system. Hospitals across Tigray have run out of almost all medication and laboratory supplies, and are forced to wash and reuse basics such as gloves.

Our data shows at least 37 health professionals have been killed and 78 injured. More than 4,000 people have either been internally displaced or are seeking refuge in neighboring Sudan. But health workers remain committed to their patients and continue to come to work despite not having had a salary for over eight months.

An assessment of 40% of subdistricts in Tigray reported 5,421 deaths between July and October 2021 caused by easily preventable illnesses. Many of the remaining health facilities are crowded by children and infants suffering from malnutrition, which has shown a sharp increase since the start of the conflict. Severe acute malnutrition today stands at a whopping 7%, while malnutrition in pregnant women and lactating mothers remains above 60%.

In addition to the compressive siege on the region, airstrikes on health facilities and other essential infrastructures such as power substations have had untold impacts on the health system’s capacity to effectively provide care for its patients.

The airstrikes are causing further strain on a health system already on the brink of complete collapse, with patients suffering from complex physical and mental trauma. Many of the victims of the airstrikes died due to lack of medication including IV fluids and antibiotics, and others are forced to live with long term disabilities due to lack of orthopedic equipment.

Victims of the airstrikes who are able to make it to the health facilities exhibit abnormal burns that indicate the use of chemical ingredients and show symptoms such as shortness of breath, and often multiple wounds that appear to be caused due to blades, indicating the possible use of blended materials.

In the face of overwhelming evidence of the targeting of civilians, public facilities, and other essential public infrastructures, the international community has remained mute. Statements issued the previous year sound eerily similar to those being issued today.

Not only that, but no international body has officially condemned Iran, the United Arab Emirates, and Turkey for the financing and sale of weaponized drones being used to target civilians and civilian installations.

The solidarity the world showed health workers during the COVID-19 pandemic has been missing toward health workers in Tigray who have not only personally been affected by the siege on the region but have been left with the responsibility of caring for a community with none of the necessary supplies.

The siege on Tigray has reinvented the wheel on human rights abuse by the government, with a blockade on banking services and a complete communications blackout that has practically severed Tigray’s connection to the world. These living conditions are unacceptable and the world should say so clearly.

The world has to take serious punitive action to ensure the complete lifting of the siege, unfettered humanitarian access, and an immediate end to indiscriminate airstrikes in Tigray — and keep its promise to never again fail humanity.

Update, Feb. 24, 2022: This piece has been updated with the length of the conflict and the number of casualties.