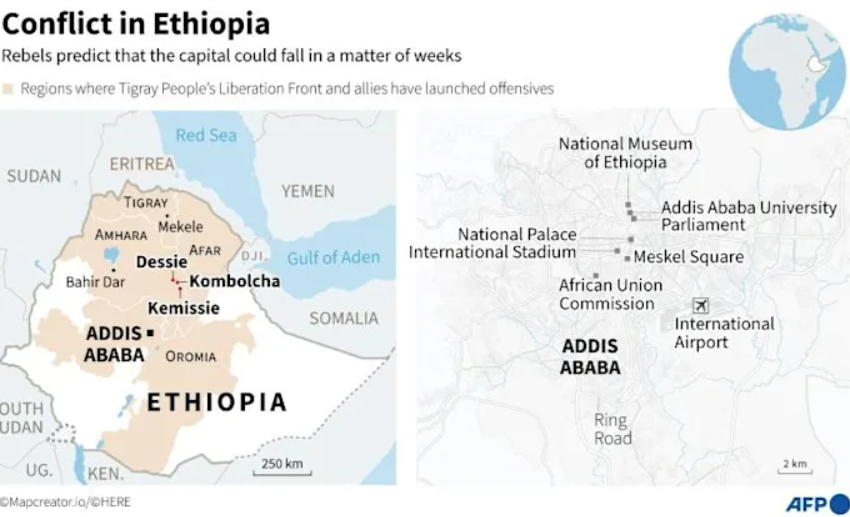 A rebel leader fighting Ethiopia’s government says his troops are near the capital and preparing another attack, predicting the war would end “very soon” as diplomats rush to negotiate a ceasefire.

“What I am sure (of) is that it is going to end very soon,” Jaal, whose real name is Kumsa Diriba, told AFP in a phone interview Sunday.

“We are preparing to push for another launch, and for another attack. The government is just trying to buy time, and they are trying to instigate civil war in this country, so they are calling for the nation to fight.”

The OLA and its allies, the Tigray People’s Liberation Front (TPLF), have claimed several victories in recent weeks, taking towns some 400 kilometres (250 miles) from the capital, and have not ruled out marching on Addis Ababa.

Jaal said his fighters were even closer — some 40 km from Addis — and had “never moved (back) an inch” from territory they controlled.

AFP could not independently confirm this claim.

Much of the conflict-affected zone is under a communications blackout and access for journalists is restricted, making battlefield positions difficult to verify.

The government has rejected suggestions the rebels are within striking distance of Addis Ababa, but has ordered the capital to prepare to defend itself.

“While we are being tested on many fronts, our collective will to realize the path we have embarked upon has strengthened us,” Abiy said on Twitter Monday, a day after tens of thousands marched in Addis Ababa in support of the government.

Ethiopia’s Human Rights Commission on Monday expressed concern about a sweeping crackdown in Addis Ababa since a nationwide state of emergency was declared on November 2.

“The Commission… has verified that arrests are being conducted in a manner that seems to be based on identity and ethnicity” and included mothers with children and the elderly, it said.

A number of countries have urged citizens not to travel to Ethiopia, and the US embassy announced over the weekend it was pulling out non-essential staff.

The UN has suspended non-essential travel to Addis Ababa, citing the “deterioration of security conditions in parts of Ethiopia, including the potential for a very serious security impact” in the capital, according to an internal communique dated Saturday and seen by AFP Monday.

Jaal said the OLA posed “no threat” to ordinary civilians but that Abiy and his ruling Prosperity Party have to be “completely removed and cleared” for reconciliation to begin.

“We will make Ethiopia — not just Ethiopia, the Horn of Africa — a peaceful, very stable place to live in. I am very confident there is not going to be conflict after Abiy Ahmed’s regime,” he said.

The OLA has been accused of multiple massacres of ethnic Amhara civilians — charges it denies.

The threat of fresh rebel advances has spurred efforts by foreign envoys to broker a settlement to a conflict that has killed thousands, displaced around two million, and inflicted atrocities and starvation on civilians.

The African Union’s high representative for the Horn of Africa, Olusegun Obasanjo, on Monday told the bloc’s 15-member security body there could be an opening for a deal — but major obstacles remain.

Obasanjo, who on Sunday met TPLF leader Debretsion Gebremichael, did not discuss the sticking points during his briefings.

But diplomats familiar with the negotiations said the TPLF will not talk until aid restrictions on Tigray are lifted, while the government wants the rebels to withdraw from Amhara and Afar first.

“What we felt from [Obasanjo’s] briefing is everybody is somehow a little bit open to a political settlement, but it’s not clear” how gaps would be bridged, said a diplomat who attended Monday’s briefing.

Abiy, winner of the 2019 Nobel Peace Prize, sent troops into Tigray in November last year to topple the TPLF, accusing them of attacking military bases.

In August, the OLA and TPLF — both designated terrorist groups by the government — announced they had brokered an alliance to fight against a common enemy, despite the two groups holding historic grievances.