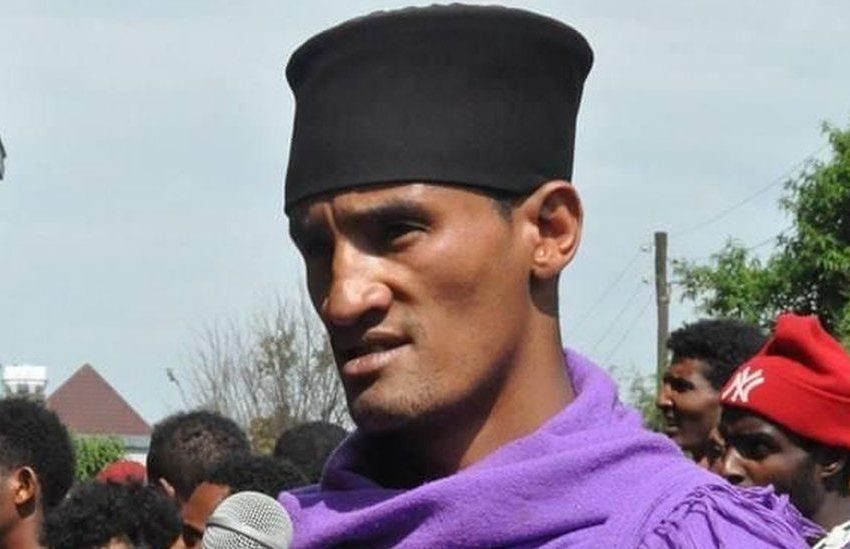 Ethiopia Tigray crisis: From monk to soldier – how war has split a church

An Ethiopian monk, who once carried only the cross and Bible in a land famous for its rock-hewn churches, is now picking up a rifle to march into battle against Tigrayan rebels in a war that is tearing the nation – and the Orthodox Christian Church – apart.

“I fight with both of them – the prayer and the bullet,” said Father Gebremariam Aderaw.

The monk, whose name means “servant of Mary”, signed up to join the Ethiopian military, weeks after Prime Minister Abiy Ahmed called on all able-bodied men to join the fight against the Tigray People’s Liberation Front (TPLF).

It launched a rebellion in November in its heartland of Tigray after a bitter fall-out with Mr Abiy over his political reforms.

“When I saw the country collapse… and the priests being killed, I joined the defence force, believing that it was important to fight,” Father Gebremariam told BBC Amharic.

He said he had already received training from a militia in the neighboring Amhara region, where he lives.

“I am not afraid of injuries or deaths during the war. I am ready to accept them all. I fear only God,” he added.

In what was seen as a response to Amhara forces capturing territory in Tigray at the start of the war, the TPLF took control of several key towns in the Amhara region in August. This included Lalibela, a World Heritage site famed for its 12th and 13th Century churches carved from rock.

“There are more than 700 priests in Lalibela, but now they are in a problem as no services are taking place due to TPLF control of the area and they are not getting salaries either,” said Menychle Meseret, an academic at the University of Gondar in Amhara.

Although no destruction has been reported in Lalibela, Mr Menychle said that a number of other churches in the region had been looted of money, food and ancient manuscripts, in a sign that the TPLF was waging an “all-out war without giving due protection to religious sites and cultural properties”.

State media also reported that the 5th Century Church of Checheho Medhanialem was damaged after coming under heavy artillery fire from the TPLF.

And the Associated Press news agency reported that its correspondent saw bullet cases lying on the floor of a damaged church in the village of Chenna Teklehaymanot, while locals said that six priests were among dozens of people killed during an attack by the group in late August.

All sides in the conflict have repeatedly denied committing atrocities.

Orthodox Christians constitute 43% of Ethiopia’s population, making them the largest and most influential religious group in the country. And the conflict has divided many of them.

Tigrayan clerics said that the government’s military operation in Tigray, which was bolstered by troops from neighbouring Eritrea, led to the killing of about 325 religious leaders, including some from the minority Muslim community, and attacks on 12 churches and mosques in the first six months of the war.

Getachew Assefa, a Canada-based academic who is a prominent member of the church in North America, told the BBC he saw the attacks as an attempt to “break” Tigrayans and to get them “to kneel” before Mr Abiy and his Eritrean ally, President Isaias Afwerki.

The 6th Century Debre Damo Monastery, built up a sheer 80ft (24m) cliff in the mountains of Tigray, was among the sites Eritrean troops allegedly looted of its old manuscripts and other cultural treasures.

Prof Getachew said the war had caused a deep rupture in the church, with the Tigray branch “informally going its own way”.

“Even in the diaspora, you will find that people no longer want to pray together. In Ontario [in Canada], a church has been renamed the Tigray Orthodox Church. It has also happened in Philadelphia in the US, and in Australia,” he said.

Prof Getachew said Mr Abiy – a Pentecostal Christian – had departed from the secularism that underpinned the Ethiopian state.

“He presents the war he is fighting as a spiritual fight. When speaking about international pressure to stop the war, he said that the country is willing to take the bitter drink that Jesus was forced to take on the Cross, and in the end ‘we will win’.

“He even says such things on religious holidays, when people should be praying for peace,” Prof Getachew added.

One of Mr Abiy’s advisers, Daniel Kibret – a deacon with a huge following among Orthodox Christians, especially the youth – has called the TPLF “satans” who should be “erased”.

“There should be no land in this country which can sustain this kind of weed,” AFP quoted him as saying.

Prof Getachew said the deacon had been his friend, but they stopped communicating soon after the war broke out.

“I realised his role in what was going on. His rhetoric is genocidal,” he added.

After the US State Department condemned the preacher’s comments as “dangerous” and “hateful”, Mr Daniel said he was referring to a “terrorist organisation” and not the people of Tigray. Mr Abiy’s spokesperson agreed, telling AFP there had been a mistranslation by Tigray sympathisers.

Mr Menychle blames the conflict on the TPLF, saying it has always promoted “hatred” and ethnically divisive politics.

“They are even heard accusing the prime minister of having an imperialistic vision similar to that of the Amhara emperors of the past, and of wanting to destroy. This was pure ethnic propaganda that the TPLF used to mislead Tigrayans into fighting,” Mr Menychle said.

For Prof Getachew, only dialogue between the government and the TPLF can end the war.

“After the mass killings and starvation, they will have to negotiate,” he said, adding that he hoped the international community would continue to pressure on the government to agree to talks.

The church’s patriarch, an ethnic Tigrayan who previously said that a genocide was being committed in Tigray, has also called for peace.

But Father Gebremariam remains on a war footing, wanting to defeat the TPLF.

“So far, we have tried in prayer, and now we [will] win by bullets. We will bury Ethiopia’s enemies and unite Ethiopia,” he said.