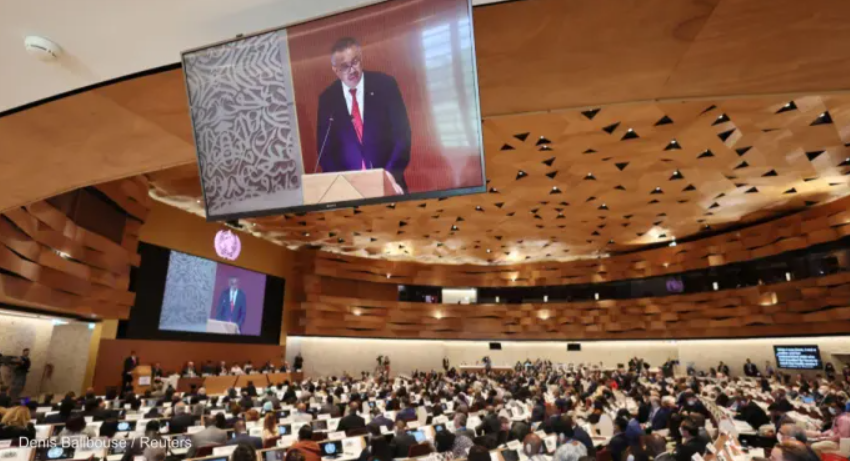 ‘I am a child of war’: WHO chief Tedros appeals for peace at WHA75

The 75th World Health Assembly opened on Sunday with an emotional plea from the head of the World Health Organization for countries to choose peace as the war in Ukraine and conflicts in other countries such as Yemen continue to disrupt health services and leave people at risk of contracting diseases, suffering injuries, or death.

WHO launched the Global Health for Peace initiative in 2019, and the WHA is expected to further discuss its implementation this week.

Tedros, who’s set for reelection at this week’s meetings, reminded member states of the harsh consequences of war, not just from his trips for the past five years in conflict and war zones — most recently in Ukraine — but also from his own personal experience during the Ethiopian civil war.

“I am a child of war,” he said, while visibly fighting back tears.

“The sound of gunfire and shells whistling through the air; the smell of smoke after they struck; tracer bullets in the night sky; the fear; the pain; the loss — these things have stayed with me throughout my life,” he said.

“I feel the same pain and loss again now, with war in my homeland once again,” he added.

Human rights groups have sounded the alarm on the humanitarian and health situation in the Tigray region of Ethiopia, which has been engulfed in conflict since the Ethiopian government launched military operations in November 2020. For months, aid organizations have struggled to access the area due to a de facto blockade imposed by the government.

A humanitarian truce was declared in March, but since then the government has only allowed a limited number of convoys of aid trucks into the region. But recently, 319 aid trucks — the highest number — were allowed in one week into the region since June 2021.

But it’s not just in Ethiopia. Tedros also expressed concerns about the situation in Ukraine and other countries. In 2022, the U.N. agency verified 373 attacks on health care in 14 countries and territories to date that killed 154 health workers and patients.

The attacks on health care in Ukraine however is taking significant prominence at the WHA. Just before the 75th WHA, member states of the WHO European region voted to condemn Russian aggression in Ukraine and asked WHO to consider the relocation of its noncommunicable diseases office outside Russia.

French President Emmanuel Macron also condemned Russia’s military aggression in Ukraine, “with the complicity of Belarus,” he alleged, in a video address to member states. He said the WHA will discuss this issue and called for member states to support a resolution put forward by Ukraine.