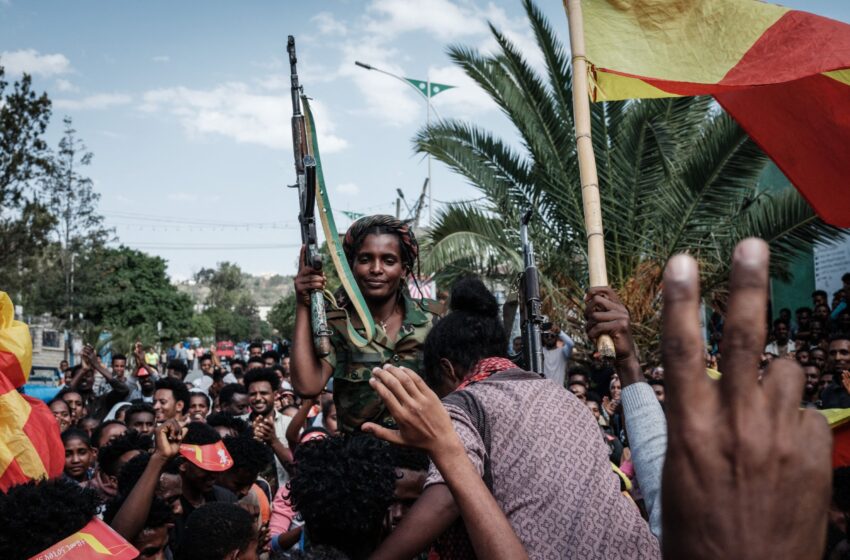 The myth of Tigrayan exceptionalism

Zola Moges’ portrayal of Tigrayans as chronically rebellious, minority oppressors, and warmongers is false and dangerous.

Narratives designed to ‘other’, dehumanize, and stoke resentment against targeted populations are widely recognized features of genocide. These fall under “polarization” and “classification” per the popular schema for identifying the stages of genocide.

Claims that a certain ethnic group—often a minority—is disproportionately privileged and characterizes itself as superior are common elements of such narratives.

In the Ethiopian context, the Tigray minority has been a target of such false allegations, which have grown and evolved to attain widespread acceptance over the last three decades.

One narrative that continues to be amplified is the myth of ‘Tigrayan exceptionalism’.

Recently, this dangerous idea was promulgated in an article published on Ethiopia Insight, titled, “Tigrayan exceptionalism has led to the war, and is now hindering peace.”

Its central contention is that Tigrayan elites, going back to at least the first Weyane rebellion in the 1940s, inherently believe in their own exceptionalism and therefore demand “differential treatment and special entitlement.”

The author, Zola Moges, supports this by framing his argument in three sections that portray Tigrayans as chronically rebellious, as minority oppressors, and as warmongers.

Zola starts by suggesting that the cultural history and identity of Tigrayans are the sources of Tigrayan exceptionalism.

As he admits, Tigray is home to the ancient Axumite and pre-Axumite civilizations, and where most ancient temples, churches, and mosques are found.

This historical reality predates the modern Ethiopian state and the Tigrayan people have been proud participants in subsequent processes of Ethiopian state-building.

However, there has never been a time when Tigrayans have used this to claim “differential treatment and special entitlement” in an organized political form.

To try and make this case, Zola removes the three Weyane resistance movements from their proper historical and ideological contexts and claims that they are rebellions inspired by a sentiment of exceptionalism.

The first Weyane or “revolt”, in 1943, was a resistance against Emperor Haile Selassie’s efforts to consolidate a centralized governance structure via selected governors in the aftermath of the liberation of Ethiopia from Italian occupation.

This rebellion is akin to the Wello revolts in the pre-World War II era and revolts in Gojjam in the 1950s-60s.

All of these uprisings speak to the traditional contestations in feudal Ethiopia—particularly among and between the northern highlanders, such as the Amharic- and Tigrigna-speaking peoples—both for regional autonomy and a share of power at the center.

In fact, far from being anti-Ethiopian, the first Weyane included as a core tenet an allegiance to the Ethiopian flag and unity.

Ideologically grounded in Marxist thought of the era, this movement was founded based on the acknowledgment that imperial Ethiopia was an oppressive structure on multiple fronts, including ethnicity and class.

Exceptionalism was most definitely not the motivation of the tens of thousands of Tigrayan women and men who sacrificed their lives in the 17-year struggle against the brutal Derg regime.

This is apparent in the very name of the TPLF (ህዝባዊ ወያነ ሓርነት ትግራይ), where “Harnet” represents the quest for liberation from oppression. The struggle was for liberation, peace, and equality, not for “differential treatment and special entitlement.”

By extricating the Weyane resistance movements from their historical context, Zola is attempting to use tropes of Tigrayans as rebellious to justify the ongoing civil war.

The second trope that he amplifies is that of Tigrayans as minority oppressors.

Because such claims have served to substantiate much of the anti-Tigrayan rhetoric, they deserve a closer look.

This narrative emerged in the era of the Ethiopian Peoples’ Revolutionary Democratic Front (EPRDF) government. During this period that was plagued by undemocratic practices, opposition parties focused their ire on the TPLF, the founding member of the coalition.

According to Zola, it is particularly repugnant that the TPLF represented a minority ethnic group and yet “arrogated to itself an equal number of representatives in the Executive and Central Committees as its coalition partners from Oromo, Amhara, and Southern regions, despite Tigray not having even one-third of the populations of the other regions”; in other words, that it dared to presume equality.

That the TPLF wielded considerable influence in the EPRDF leadership is a fact. This was due to its role in the armed struggle, its victory over the Derg, and the new political dispensation that emerged after 1991.

Given that TPLF led the armed struggle against the military junta, the revamped national army that emerged following its defeat had many Tigrayans in its higher echelons. This was progressively reduced, however, as the “revolutionary-democratic army” was gradually transformed into a national army.

During the 1990s, the Prime Minister’s cabinet and inner circle were populated by many TPLF members. This was also reduced, after the Ethio-Eritrea war in the early- to mid-2000s, as the EPRDF began to emphasize a more pan-Ethiopian national vision.

While much is made of Meles Zenawi being from the TPLF, it must be noted that his successor Hailemariam Desalegn, who had served as Meles’ deputy PM and foreign minister, was not.

Moreover, nearly all of the leaders in Abiy Ahmed’s rebranded ruling elite, known as the Prosperity Party, are not Tigrayan and many were high-level officials during the EPRDF era.

So, while the TPLF was indeed influential in the coalition, and its officials wielded considerable control in the intelligence and security apparatus, Oromo, Amhara, and other regional politicians ran their own state governments and controlled powerful federal ministries.

By focusing on the power dynamics within the EPRDF, claims of disproportionate TPLF power are then extended to suggest that Tigray as a region or Tigrayans as a people have claimed or been awarded privileges.

Contrary to another pervasive narrative, Tigray was not developed more than or at the expense of other regions. Budget allocation was determined by population size and each region’s specific needs and resources, along with certain political calculations.

Finally, the claim that the TPLF was “the first among equals” has made it possible to blame it—and by extension all Tigrayans—for everything that went wrong under the EPRDF while, ironically, not crediting it for the positive gains accrued during that period.

In this vein, Zola claims that the EPRDF government’s repressive tactics were a ploy by TPLF to retain power but fails to remark on any of the positive gains of that era, especially in terms of improved security, economic development, infrastructure, life expectancy, infant mortality rate, education coverage, gender equality, and access to health care.

In his final line of argumentation, Zola turns to look at the current period and, in doing so, misrepresents the escalation of tensions between the Tigray authorities and the federal government through a carefully curated summary of events.

Abiy was appointed as chairperson of the EPRDF and confirmed as Prime Minister in 2018 as part of the commitment by all members of the coalition to redress shortcomings, such as human rights violations, and initiate democratic reforms.

TPLF leaders initially supported this process, as noted by Zola, and so did the broader Tigrayan community, as was evidenced by the warm welcome Abiy received in Tigray.

Soon after coming to power, however, Abiy focused on consolidating his control over the state apparatus by promoting his own image and that of his allies at the expense of the TPLF. He pursued his agenda by demonizing and criminalizing the party, and implicating all Tigrayans in TPLF’s real and perceived misdeeds.

When describing these challenges that caused the relationship between the Tigray and federal authorities to break down, Zola solely blames “Tigrayan impunity”. In reality, Tigray was insisting on retaining regional autonomy as per the Ethiopian constitution.

Similarly, Zola assigns sole responsibility for the ongoing civil war to Tigrayan leaders by focusing on the allegations surrounding the “pre-emptive strike” against the federal military in Tigray on 3-4 November 2020.

This retelling of events discounts two years of escalation and a military build-up prior to Tigray’s move to neutralize the Northern Command. Rising tensions involved isolating Tigray by blocking the roads through the Amhara region and culminated in an agreement between Ethiopian authorities and Sudanese authorities to close off the border.

Nor does Zola mention the threat that came from the opaque arrangements between Abiy and Eritrean dictator Isaias Afwerki, who explicitly declared a political cleansing was needed in Tigray.

The article then devolves into a series of statements that are impossible to substantiate about the motivations and desires of the “Tigrayan elite” at this time. In this narrative, TPLF is singularly to blame for starting the war and did so in an effort to return to power in Addis Abeba.

In reality, the war against Tigrayans had been brewing for a long time, as demonstrated by pervasive rhetoric dating as far back as 2016 that the battle was between 95 million—the Ethiopian people minus Tigrayans—and five million Tigrayans.

This type of rhetoric adopted during the Abiy-era culminated in what was evidently a well-prepared assault on Tigray by the Ethiopian National Defence Forces, the Eritrean Defence Forces, regional special forces and militias, and drones supplied by foreign powers.

The author reveals his bias by brushing off the possibility of this war being genocidal despite the reality that it is being waged by a majority population with the assistance of foreign allies against an ethnic minority.

Another example of the knee-jerk reaction to any positive attributes associated with ‘Tigrayaness’ seen throughout the piece is Zola’s resentment towards media depictions of Tigrayans’ battle acumen.

Ultimately, the article reflects the author’s quest to rid complex historical, political, and social realities of all nuance to create a simplistic portrayal whereby Tigrayan elites alone in Ethiopian politics are chronically and irrationally warmongers.

The myth that Jews are inherently malevolent, intransigent, conspiratorial, and treacherous as a result of rejecting the Messiah has been central to historical anti-Semitism.

In much the same way, Zola’s piece utilizes the myth of Tigrayan exceptionalism to extricate the Tigrayan story from the broader narrative of the Ethiopian people’s fight against oppressive structures and it imbues everything associated with Tigray with rebellious traits and malevolent motives.

In the last eighteen months, the Tigrayan people have been subjected to grave atrocities. Reports, videos, and personal testimonies have revealed scores of massacres, sexual violence on a massive scale, brutal ethnic cleansing, mass arrests, and horrific killings by security officials and vigilantes.

Tigray has been cut off from the rest of the world by a medieval siege and a near-total electricity, communication, and media blackouts.

Tigray’s health system and economy have been purposely destroyed and a humanitarian blockade imposed by the federal government has created terrible conditions, with millions driven into starvation.

That many Ethiopians continue to turn a blind eye to this terrible situation is partially explained by the resentment and hatred fostered through corrosive narratives. In this context, the myth of Tigrayan exceptionalism serves to blame the victim and to cleanse the perpetrators of responsibility for these terrible atrocities.

In light of the precarious situation of Tigrayans across Ethiopia, such insidious claims are the foundations of more hate speech. If there is any hope of ever healing the political ruptures in Ethiopia, such narratives must be identified and condemned without reservation.